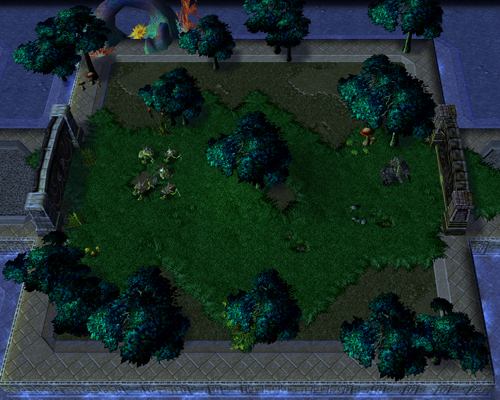 In Urso’s Forest players encounter the first mini-boss, Urso the Guardian. This dungeon will test adventurer’s coordination and position management.

Goal:  Players must first defeat a band of murlocs before proceeding. The ruckus of fighting these murlocs will awaken the forest’s guardian…

Urso will awaken once the murlocs are defeated (he is untargetable until then). Urso has a stacking buff called “Guardian’s Rage” that he gains every time he lands a hit. The buff gives him additional melee damage an will stack indefinitely. This buff will eventually become too difficult for your party to heal or defend, but luckily, there is a way to reset it.

Scattered about the forest, are Sleepyshrooms. Destroying one of these Sleepyshrooms will release a gas cloud that numbs the nervous system. The trick is to bring Urso near one of these mushrooms and then destroy it to reset his stacks of Guardian’s Rage. Make sure to not get caught in the gas cloud yourself, as it will slow your movement and attack speed.